This weekend we celebrate mothers. My mother passed through my life leaving only faint footprints of the individual who existed beyond motherhood. I saw her through a lens that said Pat Scully, my mother, and not Gertrude Minnie Helyar, the name on the certificates that registered her birth and death. 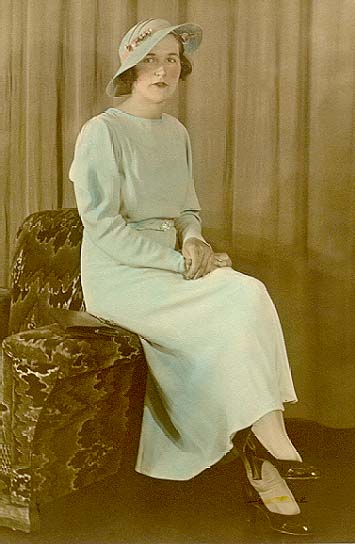 Gertrude Minnie was a country girl with seven brothers and one sister, who played a mean game of tennis and delighted in a joy ride in an early model crop duster plane. Against her mother’s strong opposition she moved to Melbourne, studied hairdressing and opened a salon, became a Catholic and married my father ditching Gertrude Minnie in favour of Pat Scully. She and my father sank their savings into a small lending library which she ran until I was born. Three boys followed and the go-girl of the Mallee gradually disappeared into mothering.

When I was in my mid-teens she gave me the freedom to follow my heart and God’s call, to swap my family home for the convent. I would be thirty two before I returned home. Those years were lost to both of us and neither of us were ever able to bridge them. She didn’t know the person I was now and I failed to recognise what it must have cost her to have her only daughter living so far away for so long, never there for things like mother and daughter shopping and lunches.

Whether it was instigated by my father’s retirement or some deep inner change, I don’t know, but in late middle age she began playing golf and as a result the china cabinet overflowed with trophies. She persuaded dad to convert the side veranda into a studio where she painted outback style landscapes. She invited her friends to the family beach house for ladies only card playing midweek stopovers. By now I was a mother myself and so absorbed in my own mothering life I failed to appreciate the non-mum like person my mother had become. Then she died quite suddenly.

It sounds weird to say this out loud, but now I’m older than my mother. It’s taken years of life experience to see her as someone with strengths and skills and unrealized possibilities of her own. Gone is the chance to explore the overlapping patterns that we shared, to wonder at the genes and characteristics I have inherited and to recognise familial similarities like my shape, my interest in things religious and the pull of a wide landscape. Maybe if I had been more receptive and she had been less closed-off, she would have told me about my birth and babyhood.

Looking back from my place at the edge of things I am struck by the difference a couple of generations has made. One of my tasks during years as a pastoral associate in a large parish was the recruitment of volunteers for all kinds of parish ministry. First responses would usually be; “Oh, I couldn’t do that. I’m just a mum.” It’s not a common response from today’s confident young mums.
My daughter and her friends are all mothers and all employed outside the home, either full time or part- time. They work really hard at mothering but the way they do it differs in many ways from the way they were mothered and I was mothered. The basics are the same.-they want their children to be healthy, happy, safe. And with their glowing skin, long hair and casual jeans they look years younger than their grandmothers did at the same age!

I love the independence and giftedness of mums today, but I suspect they don’t know much more about their own mothers than I did. Maybe it’s a generation thing, a mixture of the challenges and possibilities that accompany young adulthood and the demands of mothering. One day, like me, they too will find the space to appreciate the women their own mothers actually were – or still are.

Words from the Edge invites edge sitters like me to look beyond the obvious and find the God-depths hidden there. Let me know what the view is like from your perspective. You can reach me at judith@judithscully.com.au